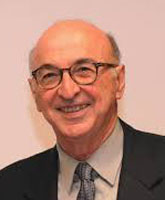 He has a doctorate in Agronomy Engineering from the Polytechnical University of Madrid, Spain and a Ph.D (Ecology) from the University of California, Davis. His professional interests are in agriculture and food production with emphasis on resource use efficiency and the sustainability of water-limited agriculture. Ten years at UC Davis (the last six as lecturer and outreach specialist in the Department of Land, Air and Water Resources); currently, emeritus Professor at the University of Cordoba, Spain, and researcher, Institute for Sustainable Agriculture-CSIC. He has been President, Scientific Research Council of Spain (CSIC); Secretary of State for Universities and Research of the Government of Spain; Director, Institute for Sustainable Agriculture (CSIC, Cordoba); and he is a member of the Royal Academy of Engineering of Spain of which he has been President in two periods, 1994-2003 and 2011-2019. He has published over 150 articles in refereed, international journals on various aspects of water-limited agricultural systems that have received over 24,500 citations (h=80, GS). He has conducted numerous foreign assignments in more than 30 countries for short term consultancy in an advisory capacity, primarily for the Food and Agriculture Organization of the United Nations.